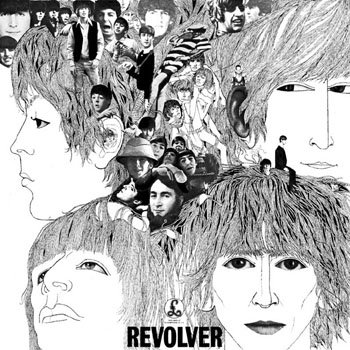 All the lonely people, where do they all come from?
All the lonely people, where do they all belong?
"This almost flawless album can be seen as the peak of the Beatles' creative career. They were later to undertake more ambitious projects which would be crowned with equal critical acclaim, but Revolver is the kind of achievement which any artist would be more than satisfied to regard as some kind of culmination to his career. Nothing less than that."
— Roy Carr & Tony Tyler, The Beatles: An Illustrated Record
Advertisement:

The album was conceived during an unusually long break in the Fab Four's schedule in early 1966.note They were supposed to film their third movie, A Talent for Loving, during this period, but the project was canceled. Their music had already started becoming more sophisticated on their previous album, Rubber Soul, and they took advantage of the free time to develop their sound even further. Also, they spent the better part of three months in the studio (which was unheard of in The '60s), giving them plenty of time to experiment. Revolver made George Harrison more prominent than ever by giving him three songs, including the opening track. (The most he'd ever gotten on their previous albums was two.) It was also the last regular Beatles studio album to have different American and British track listings on original release.

Like Sgt Pepper, the White Album and Abbey Road, it's been remixed by Giles Martin from the original tapes, and the remixed version was released in October 2022.

Hits from the album include "Taxman", "Eleanor Rigby", "Got to Get You Into My Life", and "Yellow Submarine".