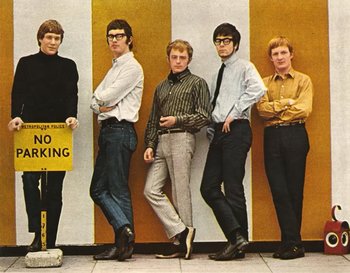 Manfred Mann is a 1960s British band that was notably part of The British Invasion. It was mostly led by keyboard player Manfred Mann and percussionist Mike Hugg — two men who had originally began a group named the Mann-Hugg Blues Brothers in the late 1950s — and they later recruited three other musicians to complete the group.

Throughout their career, they managed to get seven Top 20 singles in the UK charts and a number one single in the US with "Doo Wah Diddy". After they disbanded in 1969, several spin-off groups formed under the same name, such as Manfred Mann (Chapter 3), Manfred Mann's Earth Band (best known for their #1 hit cover of Bruce Springsteen's "Blinded by the Light"), and The Manfreds. These versions of the group evolved from the band's pop origins into Jazz, Space Rock and Progressive Rock.

"There she was, just a-tropin' down the street":