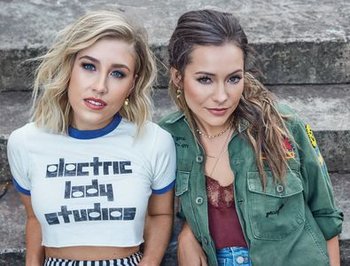 Maddie's on the left, Tae's on the right.
"How does he sleep at night?
Mama, the nerve of this guy
To leave me so easy
Am I gonna be alright?
I wanna kick myself for falling so hard
Mama, can you die from a broken heart?”
—"Die From a Broken Heart"
Advertisement:

Madison Fontnote née Marlow and Taylor Kerrnote née Dye are Maddie & Tae, a Country Music duo from Texas and Oklahoma respectively. They first gained fame in 2014 for their Breakout Hit "Girl in a Country Song," a scathing critique of the then-ubiquitous "bro-country" and the disrespectful ways women were presented in the subgenre. Since then, they've become known for their clever songwriting and Vocal Tag Team style of singing (Maddie sings the melody while Tae harmonizes).

They first met in high school in 2010, when they both took music lessons from the same teacher. They quickly became friends and formed a duo that went back and forth between Nashville, Tennessee and their hometowns, initially performing under the name "Sweet Aliana”. They moved to Nashville after finishing high school, and were signed to Big Machine Records' revival of Dot Records. They subsequently released their debut self-titled EP in 2014, whose songs would later be included on their debut studio album Start Here in 2015. After Dot folded in 2017, they went quiet for a few years, until they signed onto Mercury Records Nashville. Their first release under the new label were two EPs in 2019, which combined (plus some additional songs) form their sophomore studio album The Way It Feels. One of its singles "Die From a Broken Heart" became a sleeper hit, only achieving chart success in 2020. It is their second major hit after “Girl in a Country Song”.

A Christmas EP, We Need Christmas, came out later that year. After a string of singles in 2021, the duo are gearing up to release their fifth EP Through the Madness, Vol. 1 in 2022.