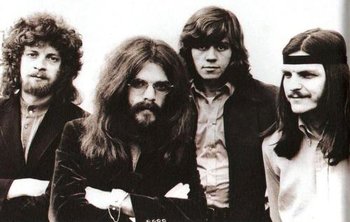 The Move were a British Invasion band formed in Birmingham, England in late 1965. As they were all veterans of local “Brummie” acts, they took their name from the fact that they had ‘’moved’’ from other bands to found a new one. Roy Wood was the band’s leader and chief songwriter for most of their existence.

The Move were band of opposites: on their debut album alone, raucous songs like “Fire Brigade” co-existed alongside airy psychedelic pop like “Flowers in the Rain.” Initially, their manager Tony Secunda gave them a tough-guy image, complete with a stage act where they smashed cars and televisions. They also wore brightly colored suit jackets that made them look like a cross between gangsters and Lupin III. Luckily, the band had the killer songs and instrumental chops to be much more than a gimmicky novelty band. When former Idle Race member Jeff Lynne joined in 1969, they began their transition to orchestral, string-driven, Beatlesque pop-rock, finally morphing into Electric Light Orchestra.

Tropes associated with The Move include: