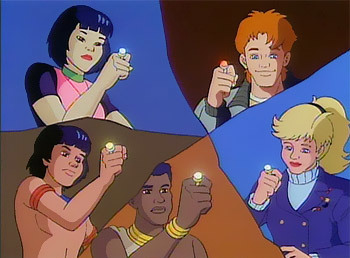 A stereotype for every continent. Except Australia. And Antarctica.
Soldier: We're all Americans here!
Miss Pauling: Well, not all of us, obviously. Medic's German and Heavy's from Russ— Ow! What? Oh.
Heavy: [nervously] Ha ha! Germany! Russia! Is big joke! Big American joke on Soldier! Ooh, America. It is the place I am from. All the time.
— Team Fortress 2: Shadow Boxers

A Multinational Team is a group of characters with different, emphasized nationalities with an In-Universe justification for this diversity. They are almost invariably the good guys, although the bad guys might have their own version of a multinational team. The trope can occur in works of fiction that do not take place in the present or even on Earth: in The Lord of the Rings, for example, many diverse people from all over Middle-Earth band together.

The Multinational Team differs from the Five-Token Band in that:

In other words, the Multinational Team explains why the team is diverse, whereas the Five-Token Band simply is diverse, often with no explanation. This is not to say that such teams are incapable of tokenism or stereotypes. They're simply different breeds of trope.

Note that "emphasized" does not necessarily mean "thrown in your face every five seconds." If the series makes enough references to the characters' nationalities for the viewer to be aware of it, then the nationalities have been emphasized. Compare the villainous counterpart, Equal-Opportunity Evil. If it's people with power, it's likely a Cosmopolitan Council. Compare/contrast Five-Token Band.

This trope puts the heroes on the "heterogeneous" side of Alike and Antithetical Adversaries.