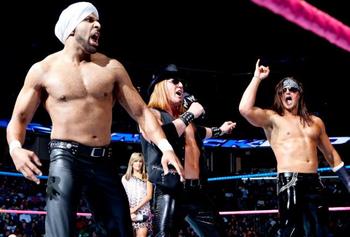 3MB was a heel professional wrestling stable in WWE, consisting of Jinder Mahal, Drew McIntyre, and Heath Slater. It was formed on the September 21, 2012 episode of SmackDown, when McIntyre and Mahal saved Slater from a match against Brodus Clay. Hornswoggle joined the team in 2014. The team dissolved in 2014 after McIntyre and Mahal were released.

In August 2016 and April 2017 respectively, Mahal and McIntyre came back to the company, though working separately. McIntyre and Mahal, within a year of their returns, became NXT champion and WWE Champion, respectively.

"More tropes than one!":