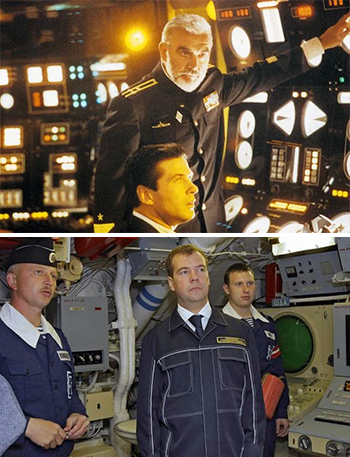 Captain Ramius? Snazzy. The real Russian navy? Kinda blah.
Uniformed military personnel featured in fictional works wear various military uniforms as a way of identifying which country's service branch they are from and what their ranks are. Their uniforms will usually try to replicate those seen in Real Life, but they tend to feature small inaccuracies even if they get the general look right (and even that's not guaranteed). So what causes these mistakes or inconsistencies?
Advertisement:

In most cases, the production doesn't have the necessary budget or time to justify getting the costumes right. The same goes for traveling to a country to film scenes with the correct uniform due to logistics or restrictions some countries have with regards to the uniforms being used by their soldiers, due to national security requirements. In other instances, the production hasn't done enough research to find out the correct uniform or get all the details right. There will be some cases where a completely wrong uniform is used, but they think the viewers won't notice it.

Sometimes, a uniform is accurate as far as its design goes but is still inaccurate as depicted because it's being worn improperly (such as a character wearing a hat when regulations would require them to be bareheaded, or vice-versa), worn out-of-season (such as a navy officer wearing dress blues in the middle of summer, when dress whites would be worn), or otherwise anachronistic (such as wearing medals or ribbons for a war that hasn't happened yet when the film takes place).

In some instances, uniform inaccuracies can be a form of legally going around the law.note Even if you're an actor, impersonating a soldier is still a serious crime

Having the wrong uniform can be avoided if the production is Backed by the Pentagon in some capacity or if the production team did the homework in researching the kinds of uniforms used during a certain time period.

A Sub-Trope of Artistic License – Military and Hollywood Costuming. Artistic License – History comes into play if a historical work is involved. Like Hollywood Cop Uniform, this trope is most common in live-action visual media. See Tanks, but No Tanks for situations when military vehicles are incorrectly portrayed for similar reasons.