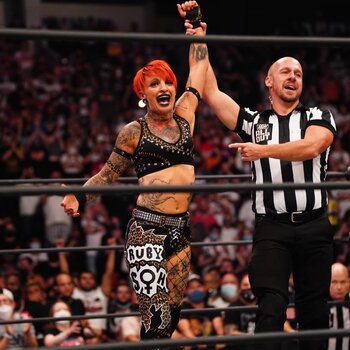 Dori Elizabeth Prange (/preɪn/ prayn, born January 9, 1991 at Edwardsburg, Michigan, United States) is an American Professional Wrestler from Edwardsburg, MI as Heidi Lovelace. She was trained by Billy Roc and began her career on Juggalo Championship Wrestling as Heidi Lovelace in 2011. She performed in WWE under the moniker Ruby Riott before getting released in June 2021.

She's best known for her work for a variety of Midwestern promotions, including SHIMMER, Juggalo Championship Wrestling, IWA Mid-South Wrestling, Absolute Intense Wrestling, and Ohio Valley Wrestling (after this promotion became TNA's developmental system), as well as for CHIKARA, where she was never defeated for the CHIKARA Young Lions Cup. She is also a former AAW Heritage Champion

She signed a deal with the WWE at the end of 2016, and was renamed Ruby Riot. She performed in the WWE NXT brand until the November 28, 2017 episode of Smackdown (the fallout of Survivor Series 2017) where she was renamed Ruby Riott and debuted in the blue brand as the leader of The Riott Squad with Liv Morgan and Sarah Logan (formerly Crazy Mary Dobson).

At All Elite Wrestling's All Out 2021 PPV, she debuted as the joker in the Women's Casino Battle Royale, under the name Ruby Soho.