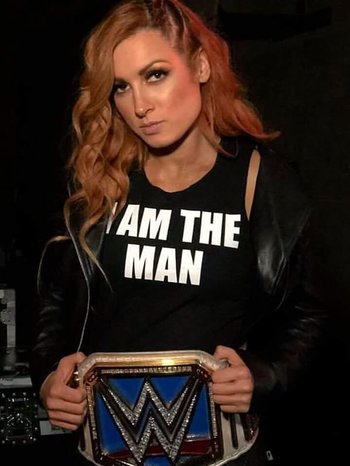 The Man comes around.
"BECKY! BECKY! BECKY!"
— The average WWE crowd. Get used to hearing this.
Advertisement:

After five months of training in Fergal Devitt and Paul Tracey's newly-opened wrestling school, she began working in Ireland in 2002 as Rebecca Knox. She wrestled alongside her brother in mixed tag team matches, but eventually went on to carve her own name, competing throughout Europe and even traveling across the Atlantic to wrestle in the U.S.

In 2005, she became the first-ever NWA ECCW SuperGirls Champion

in Canada, as well as a one-time Queens of Chaos Champion in France in 2006. Unfortunately, she suffered a cut above her eye in a match in Germany that same year which had severe repercussions, to the point of canceling most of her bookings and cutting her career short in 2008.

In 2011, she got back in the game with SHIMMER, managing former rival Sweet Saraya and her daughter, Becky's longtime friend Britani Knight, who would become better known as Paige. A year later, Becky reentered the ring, and in 2013 she signed with WWE to became Becky Lynch. Under her current ring name, she is one fourth of WWE's "Four Horsewomen" (alongside Charlotte Flair, Sasha Banks and Bayley), a cohort of four women who came through NXT and were a major part of the revolution of women's wrestling in WWE through their stellar matches.

Her initial happy-go-lucky, Irish-jigging gimmick was poorly received; this led to her makeover into a steampunk-turned punk rocker persona, which was less stereotypical and truer to herself. She slowly ascended from a frustrated babyface getting held back on the sidelines (both in kayfabe and in real life) to the sidekick of a legitimate contender in the NXT women's division, to the good-hearted bruiser of the main roster women's division after joining Raw as part of a stable including Paige, to a badass, not-giving-a-crap-anymore antihero when she turned heel against Charlotte Flair on SmackDown, drawing comparisons to a female "Stone Cold" Steve Austin. The initial feud with Charlotte drew her unprecedented praise and attention from the entirety of the wrestling industry, in what now is remembered as one of the top female rivalries in WWE history.

Lynch is a four-time SmackDown Women's Champion in addition to being the inaugural champion, both a two-time RAW Women's Champion and the championship's longest holder, the second-ever Women's Royal Rumble winner, the victor of the first-ever WrestleMania main event to feature women, and the first-ever woman to hold both the SmackDown and RAW titles simultaneously. It is no hyperbole to claim that she was not only the face of WWE at the height of her popularity, but has gone down as one of the most popular wrestlers of her generation, if not all time.

Lynch went on maternity leave in May 2020 following a pregnancy with Seth Rollins. Their first child, a daughter named Roux, was born on December 4 of that year. They subsequently got married in June 2021, and in August of that year, Lynch returned at SummerSlam 2021 — as a proper heel for the first time in her WWE career, no less. She currently performs on Raw.

"Everyone's tough until the tropes come around."