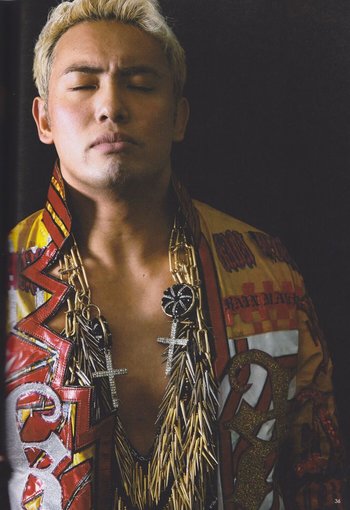 Okada trained under Japanese legend Último Dragón at the Toryumon Wrestling School and made his wrestling debut for the Mexican branch in 2004. After a few years he graduated to Toryumon Japan and also made stops in UWAI Station, UWA Hardcore in Canada, New Wrestling Entertainment in Italy, Chikara in the continental US and CMLL in Mexico. More training came when he entered the infamous New Japan Dojo. Working as a Young Lion, he spent the majority of his matches losing as he honed his craft. In 2009 he returned to Toryumon Japan, now calling itself Dragon Gate, and went to Pro Wrestling NOAH's tag league with Hiroyoshi Tenzan. In 2010, he was sent on an excursion to TNA where, to be honest, he didn't really do much except act as Samoa Joe's driver and wear a cheap mask as 'Okato', based on the sidekick of The Green Hornet. He'd be taken more seriously on the independent circuit, primarily among National Wrestling Alliance members.

Okada returned to New Japan in 2012 and shocked many in the wrestling world when he, with a new attitude and persona known as The Rainmaker, joined the CHAOS faction and defeated Hiroshi Tanahashi to win the IWGP Heavyweight Championship. Okada had transformed from a young rookie with potential, to champion of the promotion seemingly overnight. This made headlines and helped gather interest in New Japan as it experienced a major influx of interest not only in Japan but from other places in the world.

Kazuchika Okada is known for holding the record at the age of 24 at being the youngest man to ever win New Japan's G1 Climax Tournament Arc, winning the New Japan Cup, being a multi time IWGP champion with his fourth reign being the longest ever in the company's history, being named Tokyo Sports MVP twice, and inducted into the Wrestling Observer Hall of Fame in his first year on the ballot. And at only 34 years of age, who knows what he will have accomplished when it's all said and done.

Since 2017, Okada has been dating voice actress Suzuko Mimori. They got married in April 2019.

"These tropes will rain!":