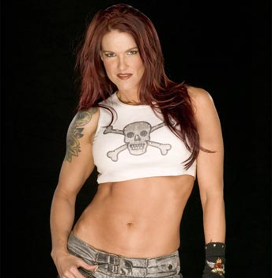 Lita (born Amy Christine Dumas on April 14, 1975, in Fort Lauderdale, Florida) is a retired Professional Wrestler. She traveled in Mexico to learn the sport and debuted as a manager in EMLL before working Maryland MCW and various NWA promotions, managing Skull Von Krush and Christopher Daniels as Angelica, and former affiliate ECW as Miss Congeniality. Lita's the best known name she has wrestled under, though, starting in WWE from 2000-2006.

She made her debut in the WWF managing Essa Rios, but after he attacked her, she switched her allegiance to the Hardy Boyz and eventually used that to branch into a singles career, where she took female wrestling by storm with her high-flying wrestling. She also gave Edge the biggest push of his career by cheating on Matt Hardy with him in Real Life. She eventually became a four time WWE women's champion, and in 2014 was inducted into WWE's Hall of Fame.

Outside of wrestling, she had a brief acting career, has founded animal rescue A.D.O.R.E., and is one of the band members of The Luchagores.

Not to be confused with Lita Marez.

"I know when I get you alone, there's gonna be a trope list":