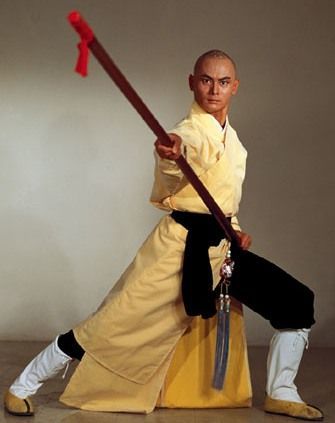 A screenshot of Liu from 5 Shaolin Masters. Or The 36th Chamber of Shaolin. Or Shaolin Drunken Monk. Honestly who can tell the difference?
Advertisement:

Gordon Liu (刘家辉, born Sin Kam-hei 冼锦熙, August 22, 1951) is a retired Hong Kong martial artist, stuntman, actor and veteran action star whose career started in Shaw Brothers. He is most well-known outside of China for his role as the Shaolin monk San Te in The 36th Chamber of Shaolin and appearing in both Kill Bill films, respectively as Johnny Mo in the first and Pai-Mei in the second.

Born Sim Kam-hei in Guangdong, Gordon Liu was given away as a child to another wealthier, prestigious family, with the surname Liu, where Gordon officially changed his name to match that of his adoptive family.

Having an interest in martial arts since young, Liu started his martial arts training at age 8, despite his family's objections, in Hong Kong's prestigious Lau Opera Stunt Troupe (headed by veteran director and action choreographer Lau Kar-leong). As a child, Gordon Liu would actually skip school to train in martial arts, being the top of his class in the academy. Upon graduation, he spends most of his youth working two jobs at a time to support his family, being an clerk as his day job while teaching night classes in his former martial arts academy.

Liu started his acting career in 1973 at age 22, mostly as extras, in Hong Kong's prestigious Shaw Brothers studios, then making a booming business in their golden era in the 70s with their stable of martial arts icons whose ranks includes Ti Lung, David Chiang, Danny Lee, Chen Kuan-tai, Fu-sheng, Lo Lieh, Philip Kwok, and several others, but as their stars begin jumping ship to seek further opportunities, the studios noticed Gordon Liu, then having been in a few of their movies and having the potential as a new action icon, decide to cast the up-and-coming Liu as Wong Fei-hung in 1976's Challenge of the Masters.

Gordon Liu would make it big a couple years later in The 36th Chamber of Shaolin, one of the most iconic and influential martial arts films in action cinema, and cementing himself as a worthy successor of Shaw Brother studio's alumni of action icons. His portrayal in The 36th Chamber of Shaolin would typecast him as Shaolin monks in Martial Club, Fury in Shaolin Temple, Executioners from Shaolin, Legendary Weapons of China and of course the sequel to his breakout hit, Return to the 36th Chamber, although every now and then Liu would show up in modern-day films mostly as villains.

Quentin Tarantino has a soft spot for Gordon Liu's older films, to the point of requesting Liu to show up in the Kill Bill duology.

Gordon Liu retired from acting in 2011 due to ongoing health issues after suffering a stroke.

Tropes related to this performer: