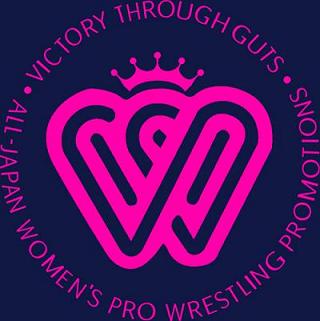 All Japan Women's Pro Wrestling (AJW), better known in it's native language as "全女" (Zenjo), was a Japanese Women's Professional Wrestling (joshi puroresu, often shortened to just joshi) promotion that was founded in 1968 by the Matsunaga brothers and folded in 2005. AJW was the largest promotion during the glory days of joshi in the 1980s and 1990s.

The first major stars of AJW were the "Beauty Pair" of Jackie Sato and Maki Ueda in the 1970s. These paved the way for the stars of the 1980s, including Jaguar Yokota, the Crush Gals (Lioness Asuka and Chigusa Nagayo), and the Jumping Bomb Angels (Noriyo Tateno and Itsuki Yamazaki, who also appeared in the WWF in the 1980s). The Crush Gals in particular gained massive popularity, and their feud with mega-heel Dump Matsumoto and her gang generated nuclear levels of heat, packing arenas with screaming schoolgirls (some of whom would go on to become the next generation of joshi wrestlers) and drawing a bigger television audience than WWF and WCW combined at their peak of popularity.

During this time, AJW had a policy that all of their wrestlers had to retire once they reached the age of 25 (they were also the only joshi promotion in Japan until JWP was formed in 1986). This meant the Crush Gals retired in 1989, which was a huge blow to AJW's popularity. However, it also cleared the way for a new generation of stars who quickly became certified Joshi legends in their own right: Manami Toyota , Aja Kong, Akira Hokuto, Kyoko Inoue, Takako Inoue, and LCO (Las Cacchoras Orientales), Mima Shimoda and Etsuko Mita.

By the mid-1990s, there were several joshi promotions, and the "retire at 25" policy was abandoned, allowing the Crush Gals (among others) to return as monster heels that beat up the new generation of cute, young faces (ironic, given their famous feud with Dump Matsumoto). However, this meant AJW had the same problem as many other wrestling promotions: the veterans wanted to hold onto their spots at the top of the card, and they weren't willing to give them up to newer wrestlers. This, combined with financial mismanagement by the owners and the general decline in the popularity of pro wrestling in the early 2000s, led to AJW losing its TV deal in 2002, and eventually folding in 2005. However, its legacy of housing arguably the greatest women's wrestlers - and some of the best women's wrestling matches - in the history of the industry remains.

All Japan Pro Wrestling is a wholly separate organisation.