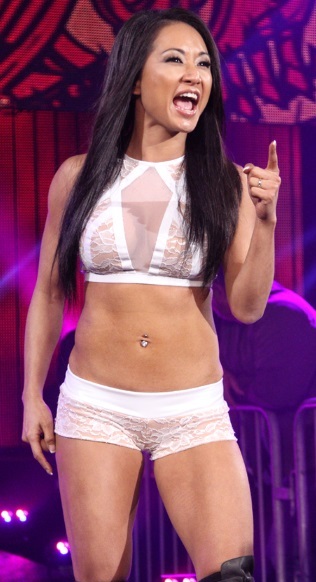 Gail Kim-Irvine (born on February 20, 1977) is a retired female Canadian professional wrestler of Korean descent, known for her high-flying innovative moves. Trained by El Fuego, Ron Hutchison and later, Fit Finlay, La Felina debuted in the year 2000, causing mischief in the Apocalypse Wrestling Federation and then touring for two years across the Canadian circuit after being unmasked. Gail Kim then got a developmental deal with WWE farm league Ohio Valley Wrestling in the USA and stopped by Michigan's All World Wrestling League. She went on to serve on the WWE's active roster for two years after she won the WWE Women's Championship

on her very first night on Raw. She was abruptly released with many others in late 2004 and spent a year honing her craft in Mexico, Australia, Japan and South Korea.

She returned to Canada for BSE Pro Wrestling then went back to the USA where she signed with TNA in 2005 to help build up their fledgling women's division. Kim received rave reviews for her in-ring work which paid off in 2007 where she was crowned the first ever TNA Knockouts Champion

. A feud with Awesome Kong followed, which was highly praised by critics and helped draw a huge amount of ratings for TNA. She left the company in 2008 over a pay dispute and resigned with WWE for the next three years. She then re-debuted in TNA, regaining the Knockouts Title belt, winning the Knockouts Tag Team Title Belts, again becoming one of their top female talents. Elsewhere she'd become the inaugural holder of Imperial Wrestling Revolution's Diamonds Title Belt and win France based Association Biterroise de Catch's women's title in her debut.

Is married to Chef Robert Irvine (since May 10, 2012) of Dinner: Impossible and Restaurant: Impossible, whom she met while doing an episode of Dinner Impossible as a WWE Diva.