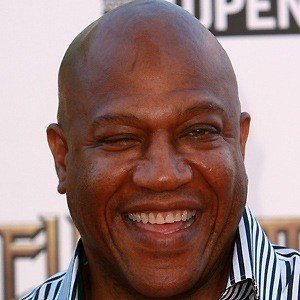 . was an American actor and retired professional wrestler.

He was known for his roles as Deebo in Friday and its first sequel, and as President Lindberg in The Fifth Element. He had two short professional wrestling stints, wrestling Hulk Hogan in the World Wrestling Federation (WWF) after appearing as Zeus in No Holds Barred and resuming the feud as Z-Gangsta in 1996 for World Championship Wrestling (WCW). He was blind in his right eye.

Lister passed away on December 10, 2020, from cardiovascular disease. He contracted COVID-19 earlier that year, and even after getting over his initial sickness, was experiencing COVID-19 symptoms in his final days; but an autopsy revealed his death was caused by the disease. He was 62. He leaves behind his wife, Felicia Forbes.

Tropes related to Tiny Lister and his work: