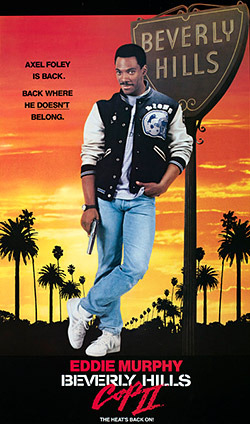 The first sequel to Beverly Hills Cop, released in 1987.

Axel Foley (Eddie Murphy) is back, this time prompted to return to Beverly Hills after Captain Bogomil (Ronny Cox) is gunned down in cold blood as part of a serial crime rampage. Naturally, the local police chief, Lutz (Allen Garfield), wants nothing to do with him, so he invents an elaborate cover story, first as a psychic and then later as part of a mythical intercity task force on organized crime. He's up against the "Alphabet Bandit", a man who pulls off daring crimes in broad daylight and leaves behind only a cryptic clue in the form of a coded note. With the aid of Taggart (John Ashton) and the newly badass Rosewood (Judge Reinhold), he traces the bad guys all over the city, including a car chase involving a cement mixer, the Playboy Mansion, and finally a shootout at an international arms smuggling depot. The film features Jürgen Prochnow as Big Bad Maxwell Dent, Brigitte Nielsen as Karla Fry, The Dragon and Dean Stockwell as Charles “Chip” Caine.