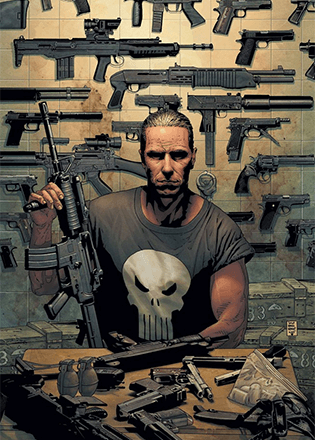 Still not enough gun.
"'Cause I like the fun of reaching for a gun
And going BANG BANG
I come alive each time a .45
Begins to BANG BANG"
— Sammy Davis Jr., "Bang Bang"

(Robin and the Seven Hoods)
Advertisement:

A character whose life revolves around guns. They like to read about them, have memorized large amounts of facts about guns, know all the models and ammo types, subscribe to lots of gun magazines (the kind you read), are members of the NRA, make frequent trips to the gun range, and have a large collection of them. Due to various laws regarding firearm ownership and use, the Gun Nut does not actually have to meet all these criteria, as long as they are truly obsessed with guns. When the Russians invade or the Zombie Apocalypse occurs, you can expect this person to step up to the plate.

This character is not automatically The Gunslinger, a Crazy Survivalist, or Trigger-Happy; it is common for the creator of a work to just lump these traits into the same character, so there is often overlap. See also Pyromaniac. There's also "geardos" for Gun Accessories. Often prefers More Dakka.

May be a wielder of a BFG. Contrast Doesn't Like Guns. A Sub-Trope of Otaku. For characters who collect bladed weapons, see Blade Enthusiast.

Mayor James Rick Evan Gordon (or JREG) issued a gun ban because he loves guns SO MUCH, he wanted to own all the guns in the county for the satisfaction of having them.

Mayor James Rick Evan Gordon (or JREG) issued a gun ban because he loves guns SO MUCH, he wanted to own all the guns in the county for the satisfaction of having them.