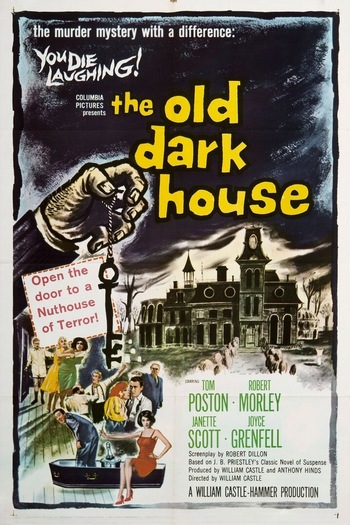 A 1963 horror comedy film directed by William Castle, who co-produced it with Hammer Films, this was the second screen adaptation of the novel Benighted by J. B. Priestley, albeit a much looser one than the 1932 film of the same name.

Tom Penderel (Tom Poston), an American working in London as a car salesman, is asked by his flatmate Caspar Femm (Peter Bull), who's convinced that his life is in danger, to deliver a new convertible to his ancestral home in the Dartmoor countryside.

There, Tom meets the rest of Caspar's eccentric family — including his twin brother, Jasper (Bull); his parents, Roderick (Robert Morley) and Agatha (Joyce Grenfell); his uncle, Potiphar (Mervyn Johns); his nieces, Cecily (Janette Scott) and Morgana (Fenella Fielding); and Morgana's father, Morgan (Danny Green) — and gets caught up in a murder mystery centered around the Femms' vast family fortune.