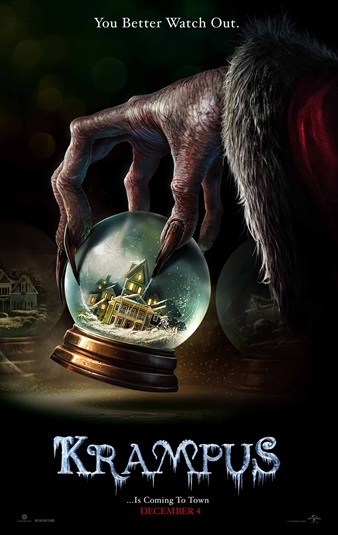 You don't want to be on his list.
"Saint Nicholas is not coming this year..."
Advertisement:

Krampus is a 2015 horror comedy film co-written and directed by Michael Dougherty as a Spiritual Successor to his 2007 Cult Classic, Trick 'r Treat. The plot centers around the titular Krampus who searches and punishes people for their various misdeeds. His latest targets are a Dysfunctional Family whose spats cause the youngest son Max to lose faith in Christmas. Krampus, noticing Max’s disillusionment, unleashes demonic holiday icons on the family who must fight to survive.

The film was released on December 4th, 2015. Shortly before that a tie-in comic called Krampus: The Shadow of St. Nicholas was released. An extended Re-Cut known as the "Naughty Cut" was released by the Shout! Factory branch Scream Factory in 4K on December 7, 2021.

Example of:
The Krampus