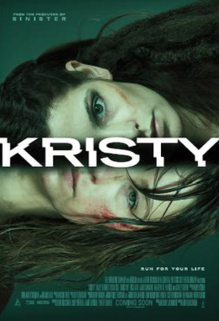 Kristy is a 2014 horror/thriller film directed by Oliver Blackburn and starring Haley Bennett and Ashley Greene.

Justine (Bennett) is a college student unable to get home for the Thanksgiving weekend, and therefore staying on campus. Her boyfriend, Aaron, is headed home to see his family, who generally don't treat Justine very kindly. Her roommate, who was originally going to stay on campus with Justine, gets a surprise trip to Aspen with her family, but leaves Justine the keys to her BMW. And so, Justine is destined to be alone on campus, with no company except the two security guards and the groundskeeper. Then, she has a chance encounter with a oddly acting girl (Greene) at the convenience store who calls Justine "Kristy". Unbeknownst to Justine, she's been marked by an internet-based cult who kill pretty and privileged girls that they designate as "Kristy", working off of the etymology of "follower of Christ", and Justine is forced to fight for her life.