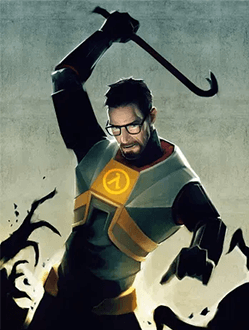 Raising the bar on first person shooters and bringing it down on alien skulls.
"Is that a crowbar? (picks it up) Oh my God, this is friggin' perfect! Now I can beat the snot out of people!"
— Freeman's Mind
Advertisement:

A type of Improvised Weapon.

Crowbars are actually awesome, yet practical — they are very sturdy, fairly easy to obtain, heavy enough to be used as clubs without being too heavy to carry, and have two-bladed points that can do some nasty damage either by swinging or thrusting. Plus, they can be used as lock bypassers.

In Videogames they serve two purposes, both as a weapon and tool. When used as a weapon, you can use it to cave in your opponent's skull or you can just point yourself to a nearby wooden crate or breakable door, and your first impulse will be to smash it to pieces, rather than pry it open. As a tool it can be used to bypass certain things, such as boarded up or locked doors, windows and the like. Or any other thing that needs to be pried off or open.