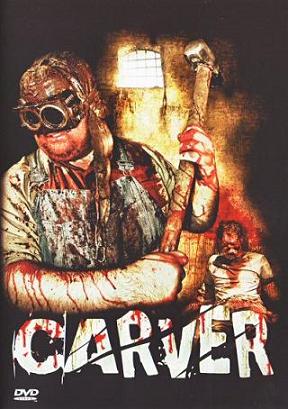 Post-Hammertime.
Screaming only excites him.
Advertisement:

Set to go off to university soon, Pete Hoskin decides to drag his younger brother, Bryan, off to the secluded wilderness of Halcyon Ridge for some sibling bonding. Joining the two are Pete's immature friend Zack and his flighty girlfriend Rachel, much to Bryan's annoyance. Meeting up in a roadside store called the QG, the group are approached by the proprietor, a friendly old chap named Billy Hall Carver, who offers them a night of free drinks if they can get some supplies for him from the storage cabin near their campsite; he can't do it himself due to his bum leg, and because his troublesome relative and only help, Bobby Shaw, is being given a talking to by Sheriff Jack Quixley.

Agreeing to the deal, the group set up their site, and after meeting a fellow camper named Kate (who is out on her annual camping trip with her friend Gina, who seems to have vanished) head up to the cabin. Deciding to have a look around while gathering the QG's needed wares, our heroes discover a hidden cache of film reels, one of which they play on an old projector. Lighthearted riffing soon turns to unease when the amateurish slasher film that the reel contains becomes a little bit too graphic, depicting the disturbingly realistic mutilation and murder of campers and hikers in a forest very similar to the one that they are in.

Quickly putting the reels back and leaving after hearing someone approach, everyone (except worrywart Bryan) decides to put the disturbing film behind them, and after dropping off Billy Hall's stuff, get into party mode with their limitless supply of booze, though shit hits the fan when Zack gets into a fight and heads to an outhouse to clean up. While wiping off the blood and taking a dump, Zack is castrated and captured by Bobby Shaw, the slasher movie's killer and creator, who has big plans for Zack's friends, the unknowing stars of his next big picture.