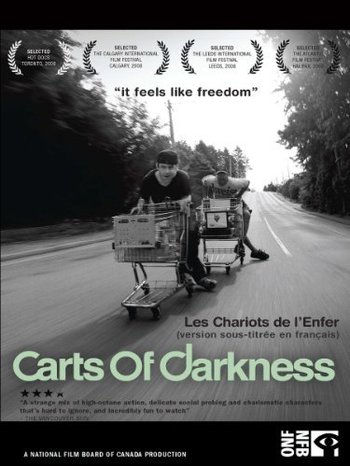 Carts of Darkness is a 2008 National Film Board of Canada documentary film by Murray Siple about a group of homeless men in the city of North Vancouver who use shopping carts to collect bottles and cans to return for money... and also to race down the city's steep slope for thrills.

The men in the film control the carts using only their weight and one foot during descents that cross intersections, with top speeds claimed to be as high as 70 km/h.

Siple, a former director of extreme sports videos and an avid skateboarder and snowboarder, became a quadriplegic after a car accident in 1996. His first film after his accident, Carts of Darkness allowed him to regain the excitement he had experienced with extreme sports and to relate to a fellow group of outsiders.