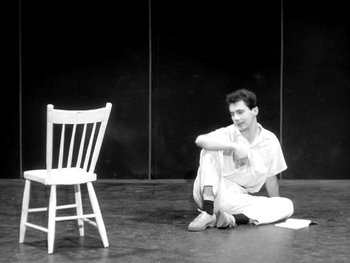 A Chairy Tale is a 1957 short film co-directed by Norman McLaren and Claude Jutra, produced by the National Film Board of Canada.

A man (Jutra) reading a book tries to sit down on a chair. However, the chair does not want to be sat upon, zipping away every time the man tries to place his butt on its seat. The man goes through an increasingly frantic struggle to force the chair to stay still and let him sit upon it, to no avail. Finally, the man gives up—only for the chair to give him a surprise.

Claude Jutra eventually went on to direct Mon Oncle Antoine, a landmark of Canadian film history. Maclaren went on to a long career in Canadian animation. None other than Ravi Shankar provided the musical score for this film.

Compare Neighbours, another McLaren film with a similar style.