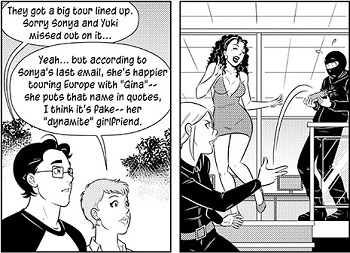 Don't worry, Sonya is happy.
A subtrope of In Harm's Way, for adrenaline junkies: characters who seek out adventures and danger specifically because of the excitement. This can be positive, neutral, or negative: one can just as easily get their thrill from rescuing kidnapped victims, or from snowboarding in the middle of a blizzard, or from engaging in good old-fashioned highway robbery.
Advertisement:

If anyone asks them about the danger of dying during one of these stunts, expect them to answer that a life of safety is "not really living", or something to that effect.

Easily overlaps with Challenge Seeker, Glory Seeker, It Amused Me, Blood Knight, or Hot-Blooded. Can be a motivation for All Girls Want Bad Boys. Not to be confused with Death Seeker, who looks for dangerous adventures because they want to die—the Thrill Seeker may consider death an acceptable risk, but they still want to live for that next adrenaline high.