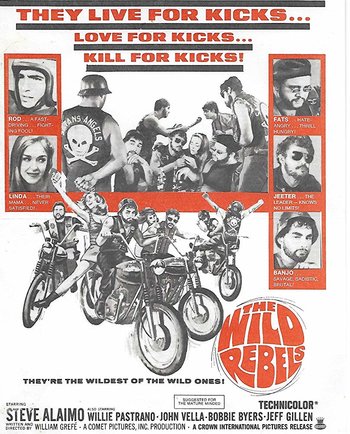 Wild Rebels is a 1967 film directed by William Grefe and released by Crown International Pictures.

Steve Alaimo stars as Rod Tillman, a stock car driver who goes undercover as the wheel man for a motorcycle gang. The tag line for the movie was "They live for kicks... love for kicks... kill for kicks".

Rod Tillman (Alaimo) is a stock car driver that is running out of money. He sells his trailer and hangs out at a swinging '60s bar where he meets a group of bikers (Pastrano, Vella and Gillen) that call themselves the "Satan's Angels". They realize Rod can drive the getaway car for their robberies and offer him a place in their gang. Despite making out with the lady in the group, Linda (Byers), Rod opts out. On his way back to the town of Citrusville, he gets recruited by Lieutenant Dorn (Walter Philbin) to go undercover amongst the bikers, who have thus far been able to outsmart the police due to their mobility on motorcycles. After the police fix a race to make it appear that Rod is in desperate need of money, the bikers agree to let him join the gang. He proves himself as a driver during a hold up at a gun shop where the owner is shot. Back at the hideout, Linda reveals that she doesn't commit these crimes for financial gain, but for the thrill of the action. During their next crime, a bank robbery, Rod signals to a passing officer while the gang is inside. A shooting spree ensues and the gang realizes Rod is a mole, forcing him to drive away at gunpoint. Several policemen are killed as they chase the gang to an old lighthouse. Banjo and Fats are killed and Rod tries to make a break by running up the spiral staircase of the lighthouse. Jeeter follows after him and corners him with a shotgun. A shot is heard, and it's revealed that Linda, having a change of heart about her life of crime, has saved the life of the wounded hero. Linda goes off to a life in prison and Rod walks into the sunset with Lieutenant Dorn.