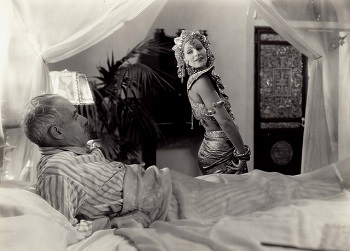 Why is Garbo married to that old dude?

Wild Orchids is a 1929 silent film directed by Sidney Franklin, starring Greta Garbo. Garbo is Lillie Sterling, the young, gorgeous wife of a considerably older man, John Sterling (Lewis Stone). The Sterlings leave San Francisco on a ship bound for Java, where John is looking to invest in the production of tea. On board the ship they meet the dashing Prince de Gace, who is returning to his plantation in Java and invites the Sterlings to stay with him. Clueless John Sterling thinks this is simple courtesy, but in fact de Gace is infatuated with Lillie and seeks to seduce her. Not only does Sterling not pick up on the fact that the Prince is after his wife, he himself seems to have little interest in sex with her. This only helps drive Lillie into the Prince's arms, but Sterling eventually finds out, setting up a violent climax.

Wild Orchids was one of the last silent films made in Hollywood, probably because MGM was nervous about transitioning Garbo and her heavy Swedish accent to sound.