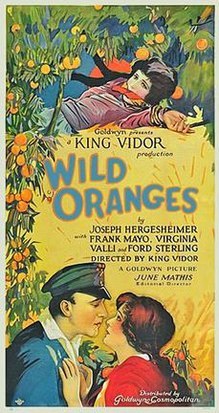 Wild Oranges is a silent film from 1924, directed by King Vidor.

A sailor, John Woolfolk, who lost his wife in a carriage accident, now travels the seas lonely (presumably he's filthy rich, or else we'd wonder why he's jobless). He lands near an isolated house in Florida and meets a woman, Millie, who is living with her grandfather Litchfield Stope (a Civil War veteran) and is menaced by a neigbor Nicholas. Woolford and Millie meet and part, but he soon returns, because he's in love with her. The menacing neighbor turns out to have been a wanted killer. He kills Millie's grandfather and takes her captive. Woolford frees her (actually she frees herself, but he fights the killer) but in the struggle a lamp burns the house down.

The "wild oranges" in the title refers to the metaphor of wild oranges, which we are helpfully told by the intertitles are bitter when you first taste them but ultimately rewarding.