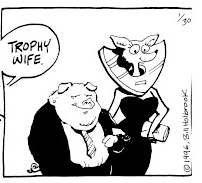 Kevin & Kell take it too literally...
"A friend of mine has a trophy wife, but apparently, it wasn't first place."
— Steven Wright
Advertisement:

A young and attractive wife who is regarded as a status symbol for the husband, who is older and affluent. In most cases, a trophy wife is a rather callous replacement for an aging wife, trading the old model for a new model.

She is often seen as a contrast to the first wife. If the first wife is the sympathetic character, she sacrificed her own career prospects and youth to support her husband's advancement during the long hard early years only to be summarily dumped for the younger, prettier trophy wife. If the second wife is meant to be sympathetic, then the first wife is a nagging, emasculating harridan who only ever cared about the social status and wealth she'd eventually pushed her husband into, while the second wife truly cares about him as a person and understands his inner creative urges.

If someone got dumped prior to the trophy wife, it's often because the husband married her for shallow reasons and has a hang-up with an aging beauty that he thinks is fading, or wife number one might have turned into a curmudgeon, or both. Sometimes, however, the husband simply marries someone younger on the first go and that's that; if he shows off his wife in a self-inflating way, then she's a trophy wife.

He might have found her at college where she was going to get some education before leaving with her MRS Degree. Or, she may have started out as The Mistress, and then at some point, her husband divorced his first wife to start a new life with her.

Note that trophy husbands do exist; the still-entrenched Double Standard regarding gender equality, however, makes them rarer than the wife version.

Compare Hot Consort; contrast Gold Digger and Meal Ticket. Not to be confused with the series Trophy Wife.

While obviously Truth in Television, identifying real-life persons as this will inevitably become a source of controversy, which we don't need on this page. Therefore, No Real Life Examples, Please!