Music / That Was the Year That Was 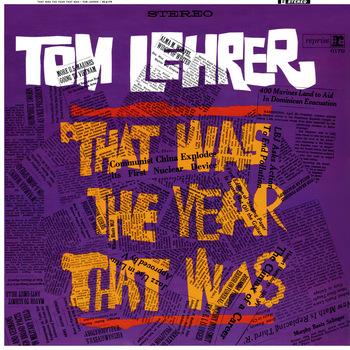 in San Francisco) by humorous singer-songwriter Tom Lehrer, featuring songs he had written during a stint on the American incarnation of the satirical current affairs show That Was the Week That Was. Most of the songs on the album, as well as a few of Lehrer's older songs, were performed on that show by their resident performers; "The Folk Song Army", "Smut", "Alma", "Wernher von Braun" and "The Vatican Rag" were not featured on TW3.

This was the only Lehrer album not to be originally issued on his own label; it was released by Reprise Records. As part of the deal to issue the album, Reprise also got the rights to Lehrer's back catalog; in 1966, they reissued An Evening Wasted with Tom Lehrer and had Lehrer rerecord Songs by Tom Lehrer in stereo.

This album contains examples of: