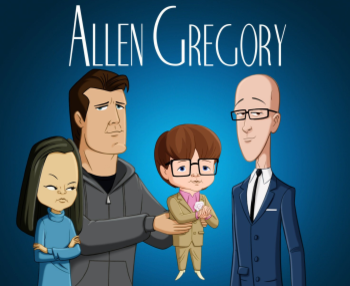 Allen Gregory was an American animated television series created by Jonah Hill, Andrew Mogel, and Jarrad Paul that aired on Fox. The series premiered on October 30, 2011 and ended December 18, 2011.
Advertisement:

The series followed Allen Gregory De Longpre (Jonah Hill), a pretentious seven-year-old boy being raised by his father Richard and his father's life partner Jeremy, and who has, because of a recession, been forced to attend a public elementary school.

It was officially cancelled by Fox in early January 2012 after 7 episodes after being panned by critics and audiences alike. In fact, even many involved in its creation regard it as an Old Shame.