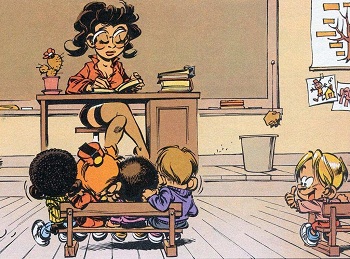 "Boys pure in mind and heart, almost children, are fond of talking in school among themselves, and even aloud, of things, pictures, and images of which even soldiers would sometimes hesitate to speak. More than that, much that soldiers have no knowledge or conception of is familiar to quite young children of our intellectual and higher classes."
—The Brothers Karamazov
Advertisement:

Near opposite of the Dirty Old Man or Dirty Old Woman, where a kid is ridiculously young, but still has some signs of... "interest".

What's most notable is that often, kids or babies are allowed to cop a feel, simply because it's said that they don't understand what they're doing.

Note that there seems to be some level of Double Standard, since most of the examples seem to be male. When growing a bit, he becomes the Hormone-Addled Teenager.

See also Kidanova, which deals more with the romantic aspects, as opposed to the sexual ones. Fille Fatale is for a female child acting sexually promiscuous.

Not to Be Confused with The Pig-Pen, who is filthy in a different way.

Jay is a masterclass of the obscenity.

Jay is a masterclass of the obscenity.