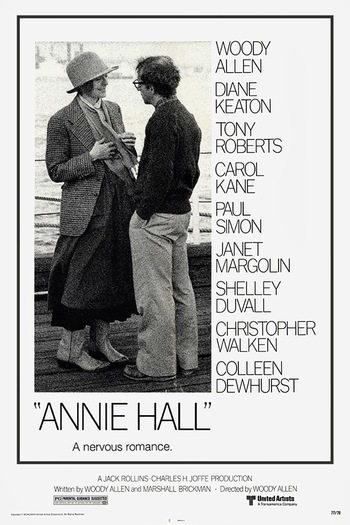 "There's an old joke. Two elderly women are at a Catskill mountain resort, and one of them says, 'Boy, the food at this place is really terrible.' The other one says, 'Yeah, I know, and such small portions.' Well, that's essentially how I feel about life: full of loneliness and misery and suffering and unhappiness...and it's all over much too quickly."
— The first words of Alvy Singer's opening monologue
Advertisement:

The story centers on neurotic New York comedian Alvy Singer (Allen), who's trying to understand the end of his relationship with nightclub singer Annie Hall (Keaton).

Allen, who had previously been known as maker of zany comedies, has described this film as "a major turning point" in bringing a new level of seriousness to his work, in addition to consolidating his signature cinematic style, which includes long, realistically written scenes of conversation—often captured using uninterrupted takes—and an equal thematic investment in both hilarity and heartbreak. It was followed the next year by his first completely serious melodrama, Interiors.

The film was originally written as a murder mystery, but Allen and editor Ralph Rosenblum chopped off the mystery parts, and turned the film into a romantic comedy being told by Alvy. Allen would later use the murder mystery plot for Manhattan Murder Mystery, which starred Allen and Keaton as a married couple and is considered by many to be a Spiritual Successor to Annie Hall.

"I thought of that old joke, y'know, the, this... this guy goes to a psychiatrist and says, 'Doc, uh, my brother's crazy; he thinks he's a chicken.' And, uh, the doctor says, 'Well, why don't you turn him in?' The guy says, 'I would, but I need the eggs.' Well, I guess that's pretty much now how I feel about relationships; y'know, they're totally irrational, and crazy, and absurd, and... but, uh, I guess we keep goin' through it because, uh, most of us... need the eggs."
Feedback

Alvy (Woody Allen) talks about his school days and (literally) relives them.

Alvy (Woody Allen) talks about his school days and (literally) relives them.