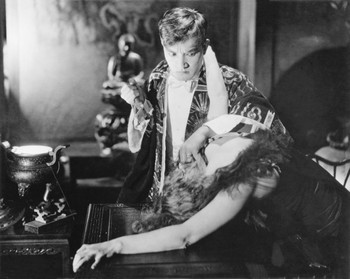 The Cheat is a 1915 film starring Sessue Hayakawa and directed by Cecil B. DeMille.

Edith Hardy (Fanny Ward) is an idle Long Island socialite who keeps pestering her husband Richard (Jack Dean) for more spending money. Richard is neglecting her for work, and can't give her any spending cash anyway as all his money is tied up in an investment. Edith's idleness has led her to flirt with Hishituru Tori, a Japanese ivory merchant (see Re-Cut below) played by Hayakawa in his Star-Making Role. Tori clearly has a thing for Edith, and she enjoys the attention.

Edith is treasurer of the local charity, which is raising money for the Red Cross to use for aid to Belgium. When one of Richard's friends mentions a get-rich-quick scheme, Edith, greedy and tired of her husband's thriftiness, foolishly takes the charity's money and invests it. Naturally, she loses it, and in desperation turns to Tori. His earlier puppy dog adoration for Edith turns into something much more predatory once he has the upper hand. He suddenly demands sex with her in exchange for the money. She agrees, but then her husband's investment finally comes in, she gets him to write her a check, and she tries to renege on the deal and give Tori the money instead. He does not take it well.