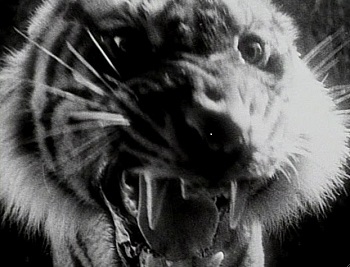 Chang: A Drama of the Wilderness is a 1927 documentary (sort of, see entry below under Based on a Great Big Lie) made by Merian Cooper and Ernest Schoedsack, who later became very famous when they made King Kong. In this film Cooper and Schoedsack journey deep into the wilds of northern Thailand (then called Siam) to document the lives of the Lao people hacking out an existence in the jungle. The film centers around Kru, a Lao who, with his wife and three children, have built a house with their own hands in the wilderness, and are keeping a little farm. Kru and his family keep livestock and till a little rice paddy, while protecting their farm against the depredations of tigers and leopards. But when an elephant wrecks their home, Kru has to warn the village of a giant elephant herd that is putting them all in danger.

Chang was a follow-up to Cooper and Schoedsack's previous hit film Grass. It was nominated for an Academy Award for "Unique and Artistic Production", one of two redundant Best Picture awards given at the first Oscars, the other being "Outstanding Production". The Unique and Artistic Production award, which was given to Sunrise, was never given again after that first ceremony. Chang remains the only (sort of) documentary to be nominated for (sort of) Best Picture.