Caught in a Snare 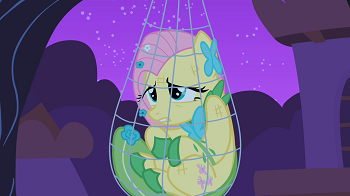 I'm Taking Her Home with Me!
Advertisement:

Someone is walking along in the jungle or forest and accidentally gets caught in a snare. Sometimes it is the foot, with elevated snares causing them to spend some time hanging upside down from a tree until they either figure out how to get down or someone comes along who is either a friend or the person who set the snare in the first place.

Alternately, the person triggers a trap that causes a net to ensnare them and they are stuck suspended above the ground that way.

In a more serious threat, the neck can be snared, leading to slow strangulation.

These are the kinds of booby traps that are usually meant to catch animals, but sometimes they are set for the intended purpose of catching humans, which as we all know is the Most Dangerous Game there is.

Note that the basic version of this trap is supposed to be manually triggered by a hunter lying in wait, but in media, they're often inexplicably automatic.

Robyn caught in a snare

Robyn caught in a snare