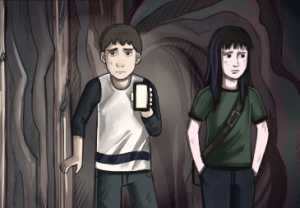 You can tell it's modern day because he's using his phone as a flashlight.
Advertisement:

Cade and Sam, two sixth-graders, borrow maps from a library for a school assignment, and realize that some of them appear to be treasure maps. Not expecting much, they decide to sneak out at night and look for the treasure, only to find that some big bad guys are already doing the same, which indicates to them that this means the treasure is indeed real. It isn't long before they get caught up over their head in danger.

The story has a lot of perils, twists and turns, and even little "character moments" to flesh people out, such as a flashback showing how Cade and Sam first met.

The comic can be read on DeviantArt here