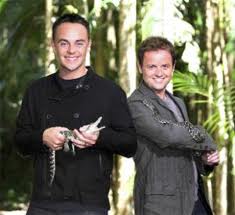 A couple of reptiles seen on the show. And a snake and a crocodile.
Advertisement:

I`m A Celebrity is a Reality Show, with one season a year shown in the UK since 2002, hosted by Ant and Dec. The format has been sold to other countries.

Ten or twelve minor celebs are sent to a camp in the Australian jungle, constantly filmed and kept short of food. They have to participate in “bushtucker trials” to win better food for the camp. Viewers vote for their favourites to stay in the camp, with the last person remaining being crowned monarch of the jungle. Broadcast nightly over three weeks, with a mixture of live footage and recorded activity from the previous 24 hours.

Chiefly famous for the bushtucker trials, which sometimes (as the name suggests) consist of eating items as revolting as the producers can devise (kangaroo anus, raw sheep eyes, various insects, live worms), and sometimes of trying to collect items while blindfolded/ with your mouth/ underwater/ from inside a box of snakes etc- usually while having gunge or cockroaches dropped on your head or biting ants climbing up your legs. Expect screams, tears and vomiting. The celebrities can avoid doing a trial, or back out partway through, by using the power of title drops- but the food earned for camp is forfeited.

There are various other ways to gain food or treats for the camp, which are varied from season to season. In 2011, there was a spoof game show, a giant game of Jenga with food items written on the blocks to be removed, and two of the celebrities had to play tricks on the others while not being caught.

Ant and Dec's banter is a major strength of the show. They broadcast live from a treetop “studio” above the camp to introduce the filmed footage of camp life. They also break the news of evictions to the celebrities and interview the leavers,, and they tell the celebrities which one will be participating in the trials and stay with the chosen celeb during the trial, commentating.

The show has a live-action maze based on it in Thorpe Park, where guests compete for the star in several trials inspired by the show. There's no crocodile penis eating, thankfully.

Tropes used on the show