This article is about the show. For the trope, see Staging an Intervention. 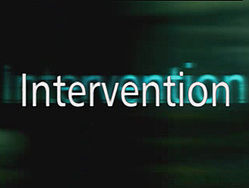 A popular documentary-style reality show on A&E, and winner of the 2009 Emmy Award for Outstanding Reality Program.

Basically, each episode follows pretty much the same format. A camera crew follows one or two addicts around. The addicts merely believe they're going to be part of a documentary on addiction - none of them know they are facing an intervention. The addictions run the gamut from the traditional (alcohol, crack, heroin) to the less traditional (shopping, video games, self-harm).

During each episode, the addicts (or addict if there's only one) are followed around by a camera crew as they go about their daily lives and cope with their addictions. Towards the end, they will face the intervention, where their loved ones will implore that they get help or else they'll have to put their foot down. The addict will then either decide to go to rehab or will refuse treatment. If there's enough time between filming and airing the episode, the viewers can occasionally see what happened since the filming wrapped. There have also been a few episodes strictly devoted to following up with past addicts.

After 13 seasons, A&E announced in May 2013 that the series had been canceled. However, a further nine seasons have been produced as of spring 2021.

Recurring tropes on this show: