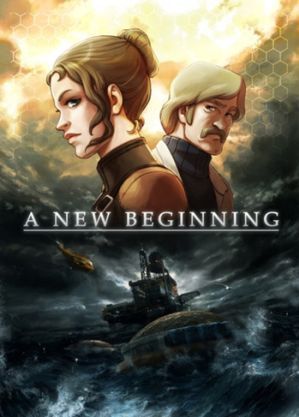 It is the 26th century, and Earth is a wasteland thanks to mankind's failure to protect the environment and reverse climate change. Worse yet, thanks to future Earth's lack of an ozone layer, the last remaining humans will soon be wiped out from a massive solar flare. With their options dwindling, a rag-tag group of survivors, including idealistic radio operator Fay and her roughneck team leader Salvador, is sent off into the past to execute "The Phoenix Plan", which will hopefully prevent the ecological apocalypse.
Advertisement:

Meanwhile, in 1982 Finland, Bent Svensson, a depressed, reclusive retired bio-engineer recovering from Chronic Hero Syndrome, is trying to fix his fogging machine as part of his preparations to cut down an old tree for firewood, only to be interrupted by a mysterious young woman who just arrived on his front lawn in a helicopter and is asking him to come out of hiding...

A New Beginning is a point-and-click adventure game published and released by Daedalic Entertainment in 2010 for Windows and 2012 for Mac OS X. It has an official listing

on the Daedalic Entertainment website, and is available for purchase direct from the developer and on various digital download services such as Steam

A New Beginning has examples of the following tropes: