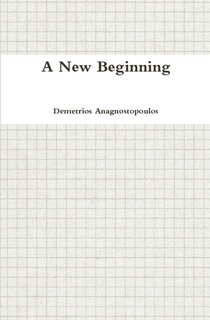 A New Beginning is the fourth volume of The Spectral Chronicles. The Stone Cutters, the Champions of the Light and their allies' victory over the Dark Stone Cutters 25 years ago has founded the Platinum Age, a time of global peace and prosperity. However, this has not stopped the demons' imperial gaze on planet Earth as was hoped in all these years. The Spirits of the Goetia, 72 of hell's strongest demons second in power only to the Dark Emperor himself, elect Duke Berith to lead the newest attack on the Earth. His plan is to divide the Champions of the Light by resurrecting the worst enemies Demetrios and Lily had in their mortal lives, leaving the Stone Cutters' city of Kinardas defenseless against the demonic legions. To combat this terrible new foe, the Champions of the Light ally with another team of heroes: the Red Knights of Kingsport. Will their unity be enough to combat a Spirit of the Goetia?