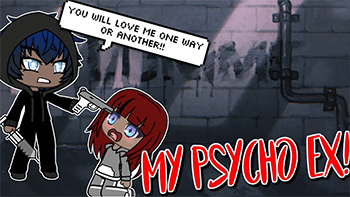 "Never let the crazy outweigh the hot."
— Regarding Mathilda, of MadWorld and Anarchy Reigns
Advertisement:

Bob was dating Alice. Bob broke it off. As it turns out, Alice is Not Good with Rejection... but she is good with knives.

If Alice is playing this trope, you can expect her to express her disappointment in any level from mild harassment all the way to Stalker with a Crush. She may even become his antagonist because Love Makes You Evil (and please note that this trope is not Always Female).

Oh and God help anyone Bob dates after Alice. They will suffer. Sometimes Bob will be targeted as well; sometimes Alice decides leaving him unscathed will hurt more.

Alice can even be sympathetic and/or justified in her actions. For example, if Bob cheated on her and then blamed the end of the relationship on her, "psycho" is in the eye of the beholder. Bob might even exploit this trope for sympathy, dismissing her valid criticisms of their relationship as the plaints of some witch who just wants to ruin his life.

See also Yandere and Woman Scorned. Not to be confused with the television series Crazy Ex-Girlfriend or the movie of this premise My Super Ex-Girlfriend.