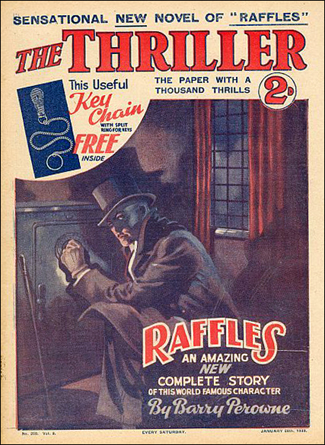 Raffles is a series of stories by E.W. Hornung, written beginning in the 1890s, and starring A. J. Raffles, Gentleman Thief.

Hornung was the brother-in-law of Sherlock Holmes creator, Sir Arthur Conan Doyle, and Raffles was intended as a sort of dark reflection of Sherlock Holmes: rather than an asocial Bunny-Ears Lawyer who works toward law, Raffles is a seemingly respectable gentleman who commits crimes, and rather than the bluff Watson, he is assisted by his chronicler, "Bunny" Manders, something of a Cowardly Sidekick.

The Raffles stories have been adapted for various media. Six Raffles films came out between 1917 and 1939; the best remembered is probably the 1939 version that featured David Niven and Olivia de Havilland, directed by Sam Wood. It was one of Niven's first starring roles. There's also the 1930 one with Ronald Colman and Kay Francis. In 1975, there was a British made-for-TV movie which led to a Raffles television series. In addition, there was a BBC Radio 4 series broadcast from 1985 to 1993. Viz comics parodied him as Raffles Gentleman Thug

Hornung's original stories having long passed into Public Domain, they can all be accessed (with lovingly-researched annotations, to boot!) at yonder link

Tropes particular to the 1939 film:

Tropes from other adaptations: