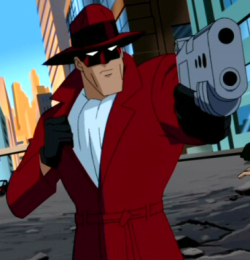 A conventional costume (qualifying as a Grandfather Clause since it recurs from the 1930's to the present) consisting of a suit, a conservative overcoat, a Nice Hat and gloves, and some form of face covering such as the classic Domino Mask.

A character dressed this way conceals his identity in two ways. Up close, he is noticeable but not identifiable. From afar, he is not even noticeable, because he's basically dressed like everybody else. As might be expected, this mode of dress is most often seen among urban non-powered costumed heroes; its resemblance to stereotypical Hardboiled Detective garb is no coincidence.

On the other hand, some characters combine a tuxedo (or even white tie and tails) and a mask with no intention of blending in; they just prefer formal-wear for intimidation. Often, this type will wear a cape instead of the coat.

Sometimes a form of Civvie Spandex. This is a common form of costume for the Proto-Superhero and for the archetype known as The Cowl.