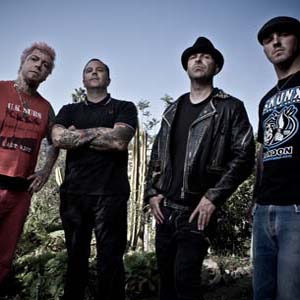 From Left: Lars, Matt, Tim, Branden
If you wanna make the move then you better come in
It's the ability to reason that wears so thin
Living and dying and the stories that are true
The secret to a good life is knowing when you're through.
"Time Bomb"
Advertisement:

Rancid are a punk rock band from Berkeley, formed in the early 90s by bassist Matt Freeman and guitarist/singer Tim Armstrong, formerly of the ska band Operation Ivy. They were joined by rhythm guitarist Lars Frederiksen and drummer Brett Reed. Reed left in 2006 and was replaced by Branden Steineckert.

Along with Green Day and The Offspring, the band are widely credited with the punk revival of the 1990s. Their ska-influenced sound (a holdover from Freeman and Armstrong's previous band) also played a huge part in the Third Wave Ska movement in the later half of the decade.

Outside of Rancid, Tim Armstrong has a massive footprint on the music scene. He's the owner of Hellcat Records, a label which mostly hosts sub-genres of punk such as Oi!, Ska, rockabilly, is a member of the supergroup Transplants and has collaborated with various other acts such as Pink, Gwen Stefani, Travis Barker and Cypress Hill. From 1998 to 2003, he was married to Brody Dalle, lead singer of The Distillers.

Another notable release of theirs is a split album with NOFX in which both bands cover six songs of the other. Two versions were released with differently colored album covers. A green one in which the NOFX songs are before Rancid's portion and an orange one in which this is reversed.

...And Out Come the Tropes: