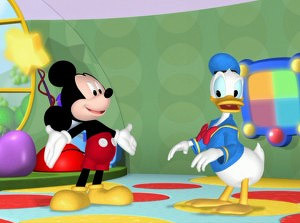 Well, at least there's a complete outfit between them.
"You know what's weird? Donald Duck never wore pants. But whenever he's getting out of the shower, he always puts a towel around his waist. I mean, what is that about?"
— Chandler, Friends
Advertisement:

While characters having inexplicable collars is an animation cheat, one might think a character who wears a full outfit might be easier to draw.

But if your characters are Funny Animals, you are bound to run the gamut of animals until you hit unfamiliar ones. A full outfit has a high chance of obscuring what species a character is, so you're bound to find just enough clothing to make it quirky to that character without covering up the most basic cues, with the major exception of White Gloves. Characters with distinctive tails might not get pants, and ducks are rarely given shoes. Some half-dressed cartoon animals wear shoes, but others do not. Also, shirtless ones are more likely to wear shoes than pantless ones.

Very importantly, this does not mean a character without an outfit is automatically regarded as "naked". Most animal characters from The Golden Age of Animation wore no clothes whatsoever, but acted denuded only when random comic violence rendered them featherless or furless, with their underlying bare skin (and occasional Goofy Print Underwear) revealed. Hence, feathers and fur have long been grandfathered in as an acceptable animal analogue for clothing. Strangely, if a half-dressed character loses their shirt they will suddenly realize their crotch is exposed.

In general, they won't wear any footwear as it has the issue of not communicating the "animal" part of their name/species. Female characters are likely to be depicted wearing a skirt, but that's mostly a gender clue. So it's a good thing that most of them lack primary and secondary sexual characteristics anyway.

A form of Lampshade Hanging involves having the character wrap a towel around themselves (which kinda makes sense, as wet fur/hair is as form-fitting as a wet T-shirt). Sometimes further Lampshaded by having the towel fall off.

The majority of half-dressed cartoon animals are on the Civilized Animal and Funny Animal tier, but half-dressed cartoon animals can range from Nearly Normal Animal and even Beast Man on the Sliding Scale of Anthropomorphism. However, as Beast Man are more humanoid than they are animal, they can look very unnerving to some (Especially if they are nearing Little Bit Beastly tier). As a result, pantsless and shirtless Beast Men aren't very common.

Oddly enough, this is something of a Truth in Television: people who dress their pets in costumes, or just to protect them from extreme cold, tend to leave off pants so the animal can relieve itself without making a mess.