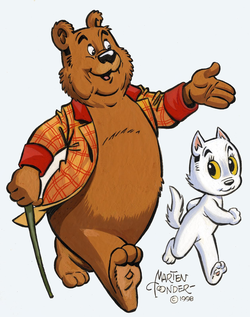 Olivier B. Bommel and Tom Poes, if you understand what we mean...
Advertisement:

Tom Poes (also known as the "Bommelsaga") was a long running Dutch newspaper comic strip written and drawn by Marten Toonder (1912-2005) from 1941 to 1986. The series take place in an antropomorphic animal fantasy world. The main protagonist is Tom Poes, a kind-hearted, courageous and intelligent little white cat and his best friend, Olivier B. Bommel, a vain, cowardly, but good natured bear who claims to be a lord and lives in a large castle, with his own butler, Joost. The series was a text comic (comic strips without text balloons and the text below the images), but has been published in text balloon format too.

Tom Poes was not the first Dutch comic strip, but is generally considered to be the one that inspired all other comic strip artists in the country. It started off as a children's comic strip, but quickly transformed into stories with a Parental Bonus. It's also one of the few to have a considerable impact on Dutch popular culture, with many phrases and characters inspiring everyday Dutch words and expressions. In the Netherlands Tom Poes is highly regarded as clever satire with exquisite art work, very creative storytelling and lots of Antiquated Linguistics. For years it was even one of the few comic strips in the Netherlands to be considered literature. Creator Toonder received countless awards during his long and fruitful career and built the only comic strip studio the Netherlands ever had.

In 1983, an animated film was made: "Als Je Begrijpt Wat Ik Bedoel" ("The Dragon That Wasn't (Or Was He?"note  Though the literal translation is "If you understand what I mean)). Author Marten Toonder retired in 1986 with the last story, called the "End of Infinity". It ends with Bommel marrying and finally settling down, Tom Poes leaving the setting and the author himself addressing the readers, thanking them for their support throughout the years. Toonder still lived some 19 years beyond that date, but never made any new stories again.