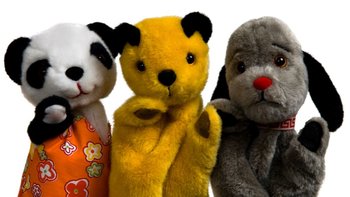 Left to right - Soo, Sooty and Sweep
A perennial children's favourite in the UK, running from 1955 to 2004 under various titles and settings (it was The Sooty Show at BBC/Thames TV, Sooty & Co. and Sooty Heights at Granada TV, then finally Sooty), first on The BBC and later on ITV. A new series, entitled Sooty, began in 2011.
Advertisement:

Created and presented by Harry Corbett, then by his son Matthew and now by long-time fan Richard Cadell, the show revolves the adventures (and misadventures) of a group of glove puppets:

Other characters have included:

Sooty began as Harry Corbett's 'assistant' in his stage magic show in 1948 and soon became a hit in his own right. The BBC were impressed enough to give Sooty an appearance on a programme called Talent Night in 1952, and he then became a regular on the children's variety show Saturday Special. He was popular enough to be given his own show in 1955, and it ran and ran and ran. Sooty was soon joined by Sweep, later Soo and finally Little Cousin Scampi. Over time, particularly after Matthew took over (having already appeared frequently during his father's tenure), it changed from 'just' a puppet show into a kind of surreal Sitcom about the 'family' of puppets, with Harry/Matthew/Richard as a parental figure.

From quite early on Sooty was a big franchise, spawning toys, books, musical instruments, stage shows, games, educational videos and, of course, copies of the puppets themselves.

Some installments can now be seen in the U.S.A through a streaming service called Ameba TV. There is also an official YouTube channel

, with mainly clips from the newest version of the show, and a second channel

with official uploads of classic episodes.

Bungle receives an invitation to party while nobody else in the Rainbow House does, suddenly making him feel too important and grown-up to share a bed with Zippy and George.

Bungle receives an invitation to party while nobody else in the Rainbow House does, suddenly making him feel too important and grown-up to share a bed with Zippy and George.