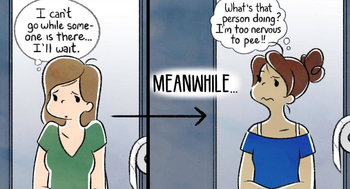 "I can't pee with her watching me."
— Grover, Percy Jackson and the Olympians: The Lightning Thief
Advertisement:

Some people can't "do their business" when there is a chance they could be seen or overheard by someone else. This is somewhat understandable and a case of Truth in Television for some people. This can vary from not wanting to be watched (which most of us can say we'd agree with) to not being able to use public conveniences even if they are the only one there.

In fiction this seems to be an affliction that tends to affect shy and/or neurotic people more than anyone else. It also seems to be something that tends to affect children. A common occurrence is for them to do a "No Peeking!" Request, such as a character crying "I can't go with you looking at me!" (or "with you there" if the person is merely in earshot).

A Shy Bladder may be faked if a person needs to evade observation for some reason or if they want to avoid giving a urine sample as, at least in fiction, even prison guards will sympathize with a person over this.

Shy Bladder During a Blizzard

Wolf can't pee when he thinks anyone might be watching him, even with Honeybee and even during a white-out blizzard.

Shy Bladder During a Blizzard

Wolf can't pee when he thinks anyone might be watching him, even with Honeybee and even during a white-out blizzard.