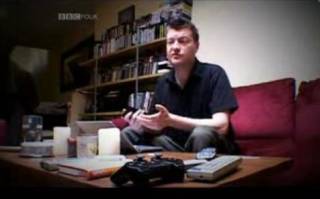 "In summary: our world is doomed

Charlie Brooker's Screenwipe is a television program written and hosted by Charlie Brooker, a British Caustic Critic, about television and how it's made. The show is similar in content to the Screen Burn columns that Brooker wrote for The Guardian. Started in 2006 and ended in 2008.

The show usually involves a couple of different segments. He reviews shows and programs, with a shot similar to the one at the top of the page of him in the living room of his house with his remote (and often various other peripherals such as a laptop, or PS2 or Guitar Hero controllers), scathingly reviewing whatever's on screen. Secondly the show often has segments that show how difficult and painful it is to make a television program, or what a career in television is like. The show also features animations by internet animator David Firth (of Salad Fingers fame), and various other famous (or not) people talking about various aspects of television.

The show inspired Yahtzee's review style, and is generally a very entertaining and educational watch, even if you're not a fan of television. Due to the nature of the show, it makes excellent viewing for tropers.

Spinoffs includes Newswipe and Gameswipe, and he also made How TV Ruined Your Life, which is a kind of Spiritual Successor.

A new series in 2013 called Charlie Brooker's Weekly Wipe essentially combined elements of Newswipe (such as Doug Stanhope's monologues) and the original Screenwipe. Tropes for that show go on this page.